Writing about the valuation of music and the effect of subscription based streaming services is a popular topic, and I think that’s a great thing. There’s a lot to explore, and a lot to fix.

Most articles I’ve recently read on this topic usually focus on the super low royalty payments payed to artists from services like Spotify, Pandora, or Apple Music. And yes, it’s all true. It’s not a topic of debate, it’s something we know and already accept. What’s causing me to sit back and scratch my head is the way most critics of the streaming model use the “smaller independent band” to further justify their argument for unfair payouts. The truth is that smaller bands are being screwed long before they get to put their albums online.

These issues with current royalty rates usually originate from established artists and record companies because there’s massive declines in album sales as music consumers switch to streaming platforms. In exchange, the royalty fees that the streaming services pay are much lower than the profits that would have been generated by actual sales.

To make up for the lack of sales, the music industry has started to rely on a new metric it calls the Album Equivalent Sale (AES). It combines sales with streams to increase the overall numbers on charts and trade figures, but these doctored consumer numbers don’t offset the loss of income. And yes, It’s a legit loss of income, but it really has very little to do with young projects or working class musicians.

Established artists and critics need to stop claiming this as a way to back up their arguments. They’re not wrong in pointing out that streaming creates problems for smaller bands, but it’s not in the same way that it does for established artists. To put it bluntly, if your band is ordering 1000 units or less each time it releases an album, you’re not generating sales at a level where the fractions of pennies earned via streaming will have a significant impact.

Why? Well for starters, you’re not making enough money yet, and that’s totally okay — everyone starts small. Low streaming fees are not hurting you. In fact, at smaller levels like this, streaming is probably providing more exposure for your band which will help with success in the future. For the same reasons, you probably have entire albums on Soundcloud, or you allow fans to set their own prices for full album downloads using Bandcamp.

Your music, at this point, is essentially free because you want as many people to hear it as possible. You’re growing a fan base which hopefully will support you and go to your live shows (where you can charge a cover and sell physical merch). It’s not until after your band grows and creates more sales that there’s a tipping point where streaming starts to create a negative impact on your income. Often, that tipping point is related to the kind of music you play, as certain genres tend to have less capability for success in the mainstream markets. For those smaller genres, the effects of streaming services might be less impactful.

This is the “cult music” world that many streaming critics like to talk about; the projects that usually fall into genres like jazz , contemporary, avant guard, classical, and even independent singer songwriters. It’s a world filled with working class musicians where album sales don’t define income, they pad it.

If this is like your project, then it’s likely that your real income is generated from small tours or local performances. It’s manifested by playing 150–200 small gigs or more per year. In this world, independent bands sell more t-shirts and small run vinyl than CDs. Jazz or classical projects plan tours through cities with universities so that they can do daytime clinics in music departments before playing evening concerts. And in this world, streaming is still going to pay absolute crap — but on the other hand, it might be a way to generate an extra couple hundred dollars each year, and that can be quite helpful.

The real reason streaming services are affecting these smaller projects is not because of a negative effect on album sales, but because of the effect on opportunities to perform live.

This is the point that I don’t see anybody talking about.

Subscription streaming services like Spotify, Pandora, Apple Music, Tidal and whatever else have become the perfect entertainment solution for bars, restaurants, and commercial retailers. It even extends into private events like parties, weddings, or corporate events. It’s perfect because it provides cheap access to unlimited music and playlists, often regardless of audience size.

And you know what? If I owned a bar, I would do the same thing. $10 a month for unlimited music to broadcast into a public space? That’s a no brainer…. but does convenience justify fair use? Maybe…? With the exception of Pandora, most high profile subscription services don’t provide a business license option. With the rest, it’s not allowed, but mostly kind of ignored.

For over a hundred years, Performance Rights Organizations (PROs) have been in charge of collecting royalties for performance of musical works protected by copyrights on behalf of song writers and publishers. Essentially, every bar, restaurant, and commercial space that will admit to playing music of any kind needs to buy a license based on an estimated number customers, and whether the music is played from a recording, or by a live group. 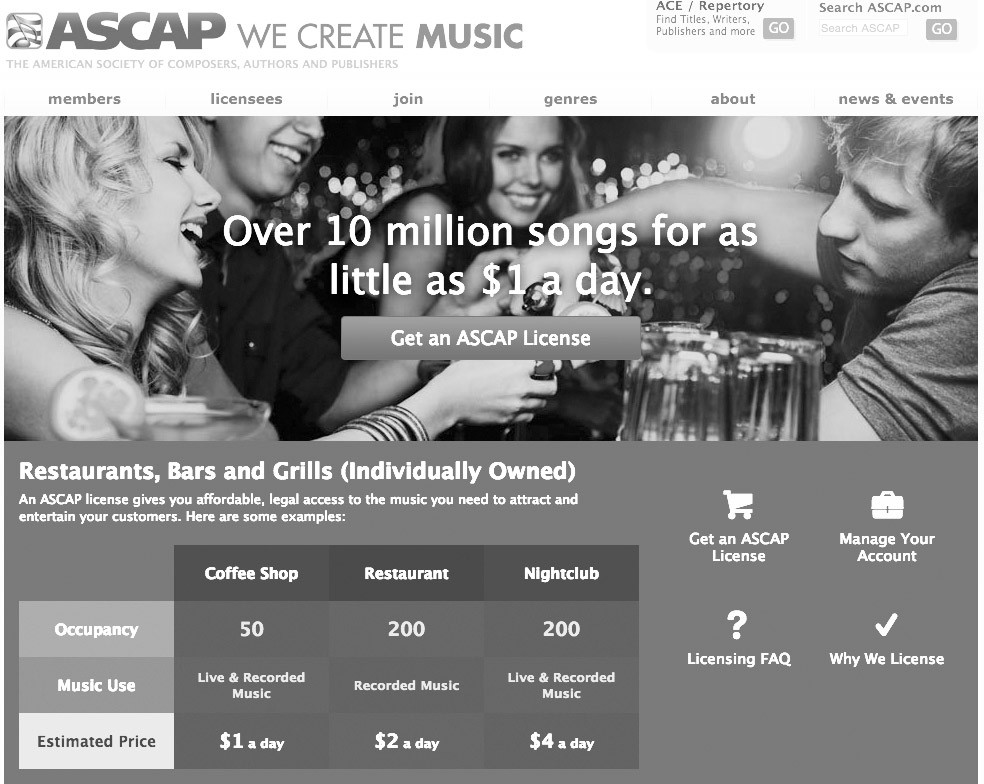 What’s exempt from this license is radio playback because technically royalties are already being collected by PROs for public broadcast. This is a system that was designed around terrestrial radio (AM/FM). And while it’s being updated to include streaming, the subscription market is growing at a much faster rate than the legislation. Interestingly, royalty rates for personal account subscriptions are actually higher than those of traditional radio. The reason for the offset is that radio audiences are expected to be much larger; rates for streaming are based on single user playback.

What’s not being tracked — at least to the best of my knowledge — is the number of customers listening while each song is streamed.

Personally, I think $5-10 a month is totally reasonable if I want to make a personal playlist. However, this is not a just price when the same list is streamed as a public performance (ex: played in a bar), to benefit a business.

As a musician, I love it when people decide to listen to the recordings that I make. What bothers me, and hopefully thousands of other “cult musicians,” is the fact that I’m regularly seeing these single user streaming subscriptions used in bars or restaurants that used to pay live bands; and at weddings it’s becoming more common to see a full PA system hooked up to someone’s iPad or phone. This idea of using an iPod or recorded music to entertain a crowd isn’t exactly new. The difference is that previously, most establishments relied on AM/FM radio, or CDs and iPods filled with — hopefully purchased — digital music. In that model, radio broadcasts were protected by the PROs, and the licenses for public music performance protected the playback of purchased music.

In truth, we’re just now starting to see the impact of subscription streaming. Most existing regulations were designed around terrestrial radio (AM/FM). And while there are modern agencies that have formed to monitor and collect mechanical royalties for digital performances, it’s still based on single user playback licenses. Outside of Sweden (Spotify’s HQ), no other countries have the ability to purchase businesses or corporate accounts providing public playback licenses.

The US Copyright Office and the House of Representatives has been considering an overhaul of some of the copyright regulation that governs musical licensing. I think this should be one of the issues they address. If regulations for terrestrial radio were designed with the expectation of public audiences, perhaps one possible way to improve the streaming model might be to do the same.

However, this isn’t the 1940’s, and streaming is a digital technology with software and applications. That means it can collect smarter user data. The question that needs an answer is “how many people are expected to be listening on the other end?” With access to that information, we could pay additional royalty fees using a sliding scale based on the precise number of listeners — which would be more accurate than a blanket public fee.

With current streaming platforms, if 50 people in a bar listen to “Bitch Better Have My Money” over the PA system, only a single play is reflected. Couldn’t it instead be reflected that 50 people listened to the song — even if it came from a single device?

It’s a theory, but this kind of adjustment would generate higher royalty checks for artists, and it wouldn’t even require an increase to the payout rates per stream since the royalty payments would be influenced by the number of listeners, and not just number of plays. Business license fees could also begin to rebalance the costs of hiring live music vs plugging in the iPad.

Implementing a more equitable system like this would require new regulations on both streaming services and on the businesses that play music. I would expect most bar/restaurant owners would flip out at the thought of having to pay more money for music. But if you think the streaming royalties are unfair, try earning a living by playing restaurants and bars. A few spots are classy with the way they hire musicians, but a lot of the time you’re playing for tips at best.

And I should point out that not all businesses are abusers; a quick search through the Spotify forums shows multiple threads of restaurants, chains, bars, etc, that are reaching out and asking if it’s possible to purchase corporate accounts. Unfortunately, those accounts just don’t exist.

Tracking the establishments that use streaming and analyzing the amount of users sounds intimidating, but it might be one of the easier parts of the process thanks to the fact that it’s very possible to anonymously collect mobile data. Purely as a basic example, I would be willing to wager that the software behind subscription streaming services can be updated to learn where the music is being played. In fact, it might already know.

Seriously. If Google, FourSquare, and Facebook can use GPS to find out where I am, so can subscription music applications. The simplest solution could be to track when a device is streaming for hours inside a known establishment, like a bar, and adjust stream counts based on the PRO public performance license already on file.

Brainstorming on the “how” is fun, but ultimately the real challenge is not going to be creating census methods, the challenge is creating the new regulations and deciding who is responsible to enforce them.

The PROs have their flaws, but they’re probably the natural party to assume responsibility. Still, many musicians feel that a new, universal, no-perks, government controlled tracking and royalty system could provide a much better census of played music (as is the case in most European countries). We certainly have the computing technology. There’s no doubt that we need to make a change in the streaming model. However, the pressure is going to have to come from the established artists. Ultimately, it’s their wealth and powerful influence that will create the momentum needed.

Already, many established artists are speaking out, but they will need to do more than demonstrate that they are earning less money. They need to show how the system is being abused, and then put serious pressure on congress, PROs, and streaming services to start monitoring the use of streaming in pubic spaces. Nobody else will have as much impact. It’s not helping the argument to express concerns that smaller projects will struggle to make a living; that’s already happening.

But once a movement is started, we can support it.