Woke up around 10 to…”Caleb – let’s get some breakfast” and I was awake immediately. And still drunk. The roll sheet for breakfast included myself, John (I suck at names – someone correct me if I am wrong), Charley, and Cein. I had eggs benedict and they were good. After breakfast, I was still drunk. We then went swimming at… eagle fish canyon, or something like that. We stopped at an official liquor store, and I paid $12.90 for a six pack of red stripe. I was still drunk. We went swimming and I got a funny tan. I was still drunk. We went back and crashed for a nap at Cein’s studio. Now I was just tired and actually pulled off a headache (this does not happen often for me). Ate dinner at a place called Mazza, which was pretty much a humus/pita/and sort of like Iranian food place… not much rice. Good food though. Afterward, we enjoyed a few episodes of “Peepshow” at Cein’s friend’s house, and then called it early. I happily slept on the floor of Cein’s art studio.

I woke up at 11:30 am (never got the call). At this point, I walked around Wendover for about 20 minutes and decided it was not so interesting. I left and headed to Salt Lake City, which is roughly 115 miles east on I-80. An old friend of mine named Cein Watson lives in Salt Lake and I had plans to meet with him in the afternoon. I arrived early and killed time by attempting to find a place to park my 6’x10′ trailer, and then using the over priced internet access of a random Starbucks. I eventually met Cein at his art studio, where I was happy to ditch my vehicle and trailer for the remainder of my stay in Salt Lake City. We biked it (that’s right, me on a bike! and my ass is soar enough to prove it) just down the street to a restaurant called the bayou or something like that. It had a bad ass jambalaya pizza and 200 beers not expected in Utah. Well done. One of the bikes then had a flat tire, so we chained em up and walked to a place called the jackalope. This is where I had my side-car experience. Apparently, you can only order a drink with 1 oz of alcohol in it – however, you order a “sidecar” and they give you a second shot in a shot glass. You are supposed to sit your drink down enough and then add the second shot yourself. Basically, a weak ass jim beam & coke with exactly 2oz of booze will cost you at least $6…. however, the flask of Bushmills in my pocket made up for the difference. By 1 am, it was a good ol drunken night. Some lady was bragging about her vagina plastic surgery where she had it “tucked” and made “pinker” than before…. shortly after meeting this person, Cein and I were off safely in a cab, far far away from interaction with the rebuilt-vagasaurus-rex. We slept (rather passed out) at (I think Charley)’s house. I was in a chair, which was amazingly comfortable even though it did not recline, and was not big enough for my legs to fit on.

Welcome to the new calebdolister.com. I am a drummer of many styles as well as a learning-composer. I think it’s funny how the word “composer” has the word “poser” in it…. So, in reality – I am a drummer and a ‘poser-composer’ …. I don’t know what that means. This has got to be one of the worst website intros ever. Let’s see…. I’m 24 and I just recently moved to Santa Cruz, Ca from Reno, NV. I’ve been playing drums for about as long as I could speak. I sometimes stutter when I talk, and sometimes musically stutter while I’m playing so that would make sense. Not so much though anymore though.

In Reno I managed to play drums for about 15 bands and whatever fill-in work I could get (I was in Reno from 2000-2006). In Santa Cruz I am bandless… for now. I moved here to seclude myself and hide from the giant arachnids in Nevada… haha no not really I came here to work at a start-up company. I’ll probably end up moving away from here soon because the spiders are indeed bigger down here than in Reno….! I don’t like spiders too much.

The photo to the right is me learning how to use a camera I just picked-up. As you can see, I have the instructions out and I am reading them thoroughly. Immediately after taking this photo, I lost the instructions. 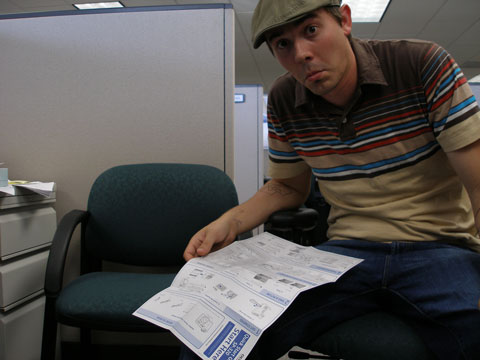